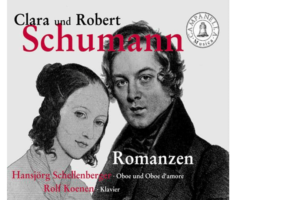 The oboe, successor to the antique shawm, enjoyed great popularity during the baroque and early classical periods, but it lost much of its prestige in the course of the 19th century. The Romantic middle classes preferred the newer and rapidly developed clarinet, with its spell-binding legato, its expressive registers and its more pleasing technique, and the oboe’s role then dwindled to that of a provider of extra colour in orchestras or ensembles, though its potential as a solo instrument was never quite forgotten by a handful of “true” Romantics.

Amongst the large second group of composers the name of Robert Schumann stands out. There is a passage in his F sharp minor Piano Sonata op. 11 which he marks to be played ”quasi oboe”, and when the piano finally became “too narrow” for him, because he often heard in his head “so many things” that he could not reproduce on the keyboard alone, then the eloquent double-reed instrument came into favour with him again – for instance in the first movement of the Piano Concerto and of course in the Three Romances op. 94, one of the series of duos with which he strove to overcome the limitations of his piano.

Opus 94 forms the opening work in the present programme, which could be characterised as “Scenes from a marriage of performing artists”, since his wife Clara, née Wieck, is also represented here with her three beautiful Romances op. 22, written for and dedicated to Joseph Joachim, a family friend. These pieces too can be played just as well on other melody instruments, as also can those of her husband that are included in this recording, especially as he always allowed his publisher some leeway when advertising new publications. The Three Fantasiestücke op. 73 played not on clarinet but on oboe d’amore, and the Adagio and Allegro op. 70 played not on horn but on oboe – these do not merely exist as possible alternatives but supply a definite enrichment of the repertoire, as does also the small selection of songs which Hansjörg Schellenberger performs in his instrument’s “singing tone”.