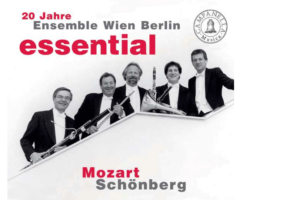 Among the indisputable essentials of chamber music are the four compositions that were recorded in 2002 for Campanella musica by the Ensemble Wien-Berlin for its 20th anniversary. They are essential because the quintet grouping always involves a significant degree of condensation, irrespective of whether it’s a question of very flowing lines by someone such as Franz Danzi, the abstract formulations of an avant-garde composer, or, as first in this case, compositions for mechanical organ skilfully arranged for flute, oboe, clarinet, horn and bassoon.

These particular Three Pieces for Mechanical Organ K594, 606 and 616, dating from the last year of Mozart ‘s life, gain, through Hansjörg Schellenberger’s arrangement, a transparency that allows the audacity of the harmonic conception to stand out in all its intensity and thus, however unlikely it may seem, to dovetail perfectly into the first fully dodecaphonic work. Arnold Schoenberg’s Wind Quintet op. 26, composed 1924, marked the end of his search for a way out of expressionistic atonality and opened up new insights that provoked prolonged controversy but were unquestionably an essential part of the history of 20 th-century music.