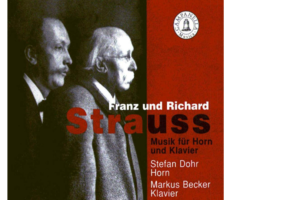 
If Franz Strauss (1822-1905) had not become the father of a famous son, he would doubtless have joined the ranks of the “forgotten composers”. But because his offspring was a child prodigy and became world famous both for his symphonic output and his operatic works, the well respected principal horn in the Bavarian state orchestra attracted much attention: “He’s a truly insupportable person, but when he plays the horn, all is forgiven,” remarked Richard Wagner of this excellent musician, who had no time for Wagner’s grand music dramas but was very fond of Robert Schumann, Felix Mendelssohn, Johannes Brahms and other romantic composers – and Franz Schubert, on whose “Longing” waltz he composed a Fantasie for horn and piano. This extensive work opens our programme, which presents almost all the elder Strauss’s duos and also includes two early pieces written by the younger man for his father.