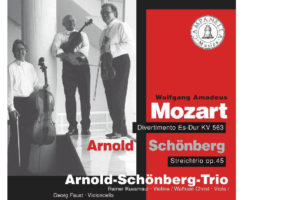 The combination of Mozart’s Divertimento in E flat K563 and Schoenberg’s String Trio op 45 is both unusual and telling. On the one hand we have a piece by a classical composer that began as a sideshoot in a genre usually limited to light entertainment but strays into the deeper realms inhabited by the Gran Partita for twelve wind instruments and double bass K361 or even Schubert’s late C minor Quintet; on the other hand a turbulent distillation by the exponent of the “new music” who in this late work transcends to some extent the dodecaphonic style – this is a meeting of minds on a level that no longer separates works according to the epochs in which they were written.

Another encounter between Mozart and Schoenberg is offered by Campanella musica on “essential” CD C130137, recorded by the Ensemble Wien-Berlin.