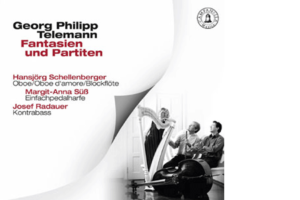 
In 1716 Georg Philipp Telemann, then aged 35, published his “Little chamber pieces, consisting of six parts, arranged in an easy cantabile style for violin, transverse flute, also for keyboard but especially for the oboe, in such a way that both the beginner and the virtuoso have the chance to be heard.” With these words the composer said all that needed to be said concerning these truly delightful pieces.

1732/33 saw the appearance of twelve “Fantasies for transverse flute without bass”, each followed by a further dozen Fantasies for violin and for viola da gamba. These solo pieces do not follow any prescribed schema; instead they mainly offer a variety of musical forms and modes of expression, playing with the formal canon of the time, from preludes via fugues (seemingly polyphonic but in fact single-voice) to variations, overtures in the French and Italian style, and the ever-popular dance forms, in which, more than once, the sounds of nature play their part.