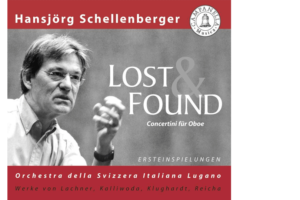 Lost & Found means coincidences, happy chances and a determination to uncover music written and no doubt performed long ago and then completely fallen into oblivion. The 19th century was and remains of particular interest to oboists, because their instrument, which was still very important in Mozart’s time, came to be seen, both in the general perception and also in the eyes of many composers, as no more than a provider of orchestral colour – essential, but, throughout long passages, given virtually no solo work. There were of course exceptions….

… which can be assembled into excellent programmes. Here we start off with the Divertissement op. 58 by the Bohemian composer Jan Wenzislaus Kalliwoda (1801-1866), once very famous, next the wonderful Concertino op. 18 by Liszt’s friend August Klughardt (1847-1902), then the Concerto in F major by Joseph Reicha (1746-1795), a contemporary of Haydn and Mozart, who as musical director at the court of the Elector of Bonn had in his ensemble no less a figure than Beethoven on the viola – and finally the Concertino by Ignaz Lachner (1807-1895), the middle of the three Lachner brothers who in the 19th century all enjoyed great esteem as composers, conductors and teachers. Even though they and all their works have somewhat faded into the background in comparison with their greater contemporaries, they composed much that is worth reviving – as this album impressively proves in five quarters of an hour.