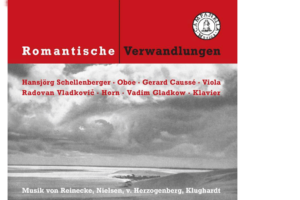 Franz Schubert, Robert Schumann, Felix Mendelssohn, Franz Liszt, Richard Wagner, Anton Bruckner, Johannes Brahms: the great names in German Romanticism have, over the years, largely monopolised the attention, interest and affections of music lovers, leaving little time for composers of the second rank. Yet many of the latter have outstanding and timeless merit, and amply repay a closer look: examples are Carl Reinecke, long-serving Kapellmeister at the Gewandhaus and a sought-after teacher; August Klughardt, whose place in history is as director of the Weimar opera house; and Heinrich von Herzogenberg, who taught at the Königliche Hochschule für Musik in Berlin. These once highly-regarded men should not be seen as in direct competition with any of the “immortals” but should rather be sought in conjunction with each other; then amazing things can happen, as in these Romantic Transformations. August Klughardt’s delightful Schilflied for piano, oboe and viola op 28 and Heinrich von Herzogenberg’s evocative Legends for viola and piano op. 62 are as if made for each other, and seem to have been so conceived that they even make harmonic room between them for the Danish composer Carl Nielsen, and prepare the ground quite naturally for the final pieces by Carl Reinecke. The one seems to follow the other in a natural metamorphosis, the romantic tones of oboe, viola and horn making an impression as of constantly changing effects of light and illumination. In short, these composers come across particularly strongly when grouped together.